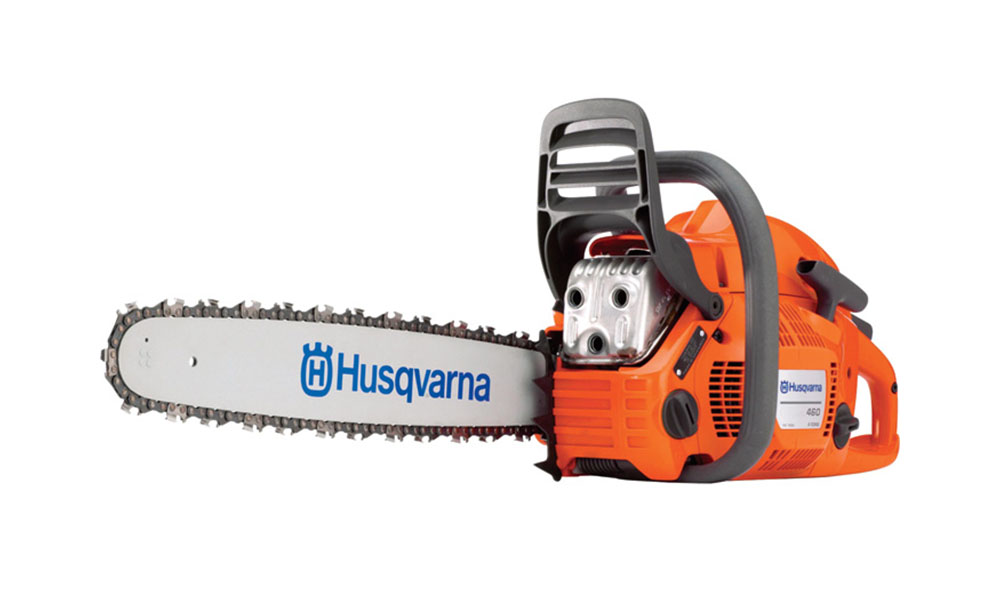 This summer as I was sitting around the campfire with some friends it occurred to me that
the fire just wasn’t big enough. It wasn’t because we weren’t very good at making fires, as we all had a lot of experience at camping and outdoor activity, the problem was with the size of the pieces of wood we were putting in the fire. The logs simply weren’t very big. I couldn’t help but think it would’ve been nice to have a chainsaw at that point in time to tackle one of the large trees in our vicinity. The wood we had available was from one of those prepacked bundles you buy at the local store.

Those trees that we were surrounded by that day would have required a pretty big chainsaw to chop them down. Something like the Husqvarna 966048324 460 24-Inch 60cc Rancher Chain Saw would’ve been perfect. While we’ve looked at other models from Husqvarna on this site, none of them pack quite the punch that this one does. As far as home chainsaws go, this is one of the biggest and baddest available. It’s also a little more expensive than others we’ve reviewed at more than $500.

It’s All About the Reach

There are a lot of reasons why a chainsaw can make your life a lot easier. They cut through wood a lot faster, they allow you to cut through bigger pieces of wood than would otherwise be possible, and they are easier on the body overall. When it comes to the Husqvarna 966048324 these benefits are only magnified. This machine has one of the longest blade bars, at 24 inches, you’ll find on a chainsaw for home use. With that extra reach you can cut those higher up branches without a ladder and you can easily slice through some thick pieces of wood.

This Husqvarna chainsaw also comes equipped with the manufacturer’s patented Air Purge and Smart Start technologies, which are designed to make starting your chainsaw a lot easier. The air purge system works to remove air from your carburetor so that it doesn’t contaminate your fuel, ensuring that the system receives the right mixture of fuel it needs. It’s an efficient and effective system that makes using this chainsaw a lot less frustrating than some others on the market.

The Inertia of Safety

If there is one thing that’s always concerned me about chainsaws then that has to be the potential for this type of tool to kick back and cause potential injury. The 966048324 is equipped with an inertia activated chain brake that automatically stops your chainsaw when it senses a quick reversal of the machine’s motion. It’s a great safety feature that can really help to create peace of mind while you’re working.
.

Tension from the Side

If you use your chainsaw a lot then the chain is bound to work its way loose after a while. That’s not a major issue with this chainsaw as it has a built-in side-mounted chain tensioner that’s within easy reach at all times. It doesn’t require any extra tools to make adjustments – you can stop the chainsaw, make a quick adjustment, and get right back to work. It’s a feature that will save you a lot of time and a lot of frustration.

For a small-engine tool this Husqvarna chainsaw has some decent pep. It comes equipped with a 3.62 hp 60 cc two-cycle engine. It’s capable of creating extra torque and a wide range of RPMs to give you the extra power you need to work through some of those tougher jobs. It can easily handle just about anything you can throw at it although, as is the case with any internal combustion engine, it does require regular maintenance to perform at its best.

A Little on the Heavy Side

As you might expect with such a powerful chainsaw it’s also a little bit heavier than some of its competitors. This machine weighs in at a hefty 21 pounds, which is manageable but you’ll definitely feel it after a couple of hours of use. Your shoulders will not be thanking you after lugging around an extra 21 pounds while you saw through those logs.

On the plus side it does have built-in low-vibe protection technology that will minimize the impact of vibrations on your body. This won’t make the chainsaw any lighter, but it will make it easier to manage. Cutting wood with a chainsaw will always be hard work, but at least you’ll be a little more comfortable with this built-in feature.

If you’ve ever used a chainsaw it’s a good possibility that you ran into some difficulties from time to time because of knots in the wood. It’s this type of thing that can cause kickback, or at the very least can cause the engine to stall and potentially do some damage to your machine. Fortunately, the Husqvarna 966048324 has built-in stop-control technology that will shut the machine down when it runs into this type of problem. This will minimize the potential for injury and damage to the machine.

While the vast majority of reviews on this product are overwhelmingly positive it does have a few critics. People that have been less than impressed with this chainsaw have pointed out that Husqvarna’s customer service could use some improvement. These critics have also pointed out that the saw is prone to mechanical problems, mostly related to the chain brake feature. This is an obvious safety concern, but fortunately it doesn’t seem to be a common problem that most owners have experienced.

The Extra Reach You’re Looking for

It’s clear that this chainsaw is far from perfect, but overall most people that have purchased it seemed quite happy. It’s a powerful chainsaw, with a reach advantage on most of its competitors in the home chainsaw market. If you’re in the market for a chainsaw with a little extra power then this is a great option.